In my last post I dug a little deeper into a stretch of twenty-five games from January to March where the Oilers posted, for the first time in over seven seasons, a Corsi For% over 50%. What I found was that the coaching staff had actually reduced the ice time of one Lauri Korpikoski during that stretch, which may have played a role in the team’s overall performance when it comes to possession. As we know Korpikoski has been one of the league’s worst possession players and has a history of dragging down the performance of linemates.

Now if we look at the actual rate of shot attempts for and against in rolling 25 game averages, we see that the team was actually suppressing shots poorly for most of the season, improved  over that 25-game stretch from January to March, and then cratered late in the season (Source: Corsica Hockey). This indicated to me that something might have happened on the blueline and was worth looking at again in terms of deployment during the stretch of 25-game where they had a Corsi For% over 50, and the games after it.

Below is each defencemen’s proportion of ice time during the course of the season, which is available at Hockey Viz. I’ve added the vertical red bars to show where the Oilers had a Corsi For% over 50% and highlighted young Brandon Davidson’s line. 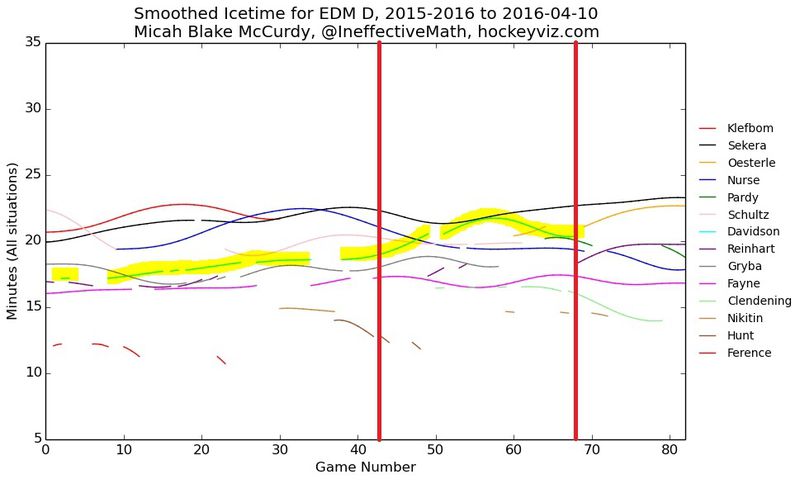