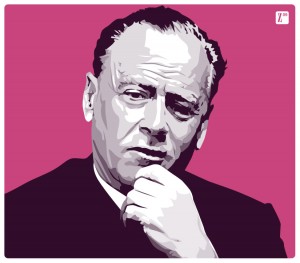 Originally posted at Hockey in Society.

The jersey of any sports team, professional or not, holds a history, a story, and many different meanings. The message that resonates with any sports jersey is different depending on who is involved in the communication process. To some, the jersey simply designates who plays on what team. For others, a jersey holds significant, personal meaning which can be immersed in a narrative to build and share.

During two embarrassing losses on home ice this past season, two Edmonton Oilers jerseys were tossed by fans on to the ice. Both were acts of frustration and disapproval towards the club and their miserable performance. Many understood why the fans threw the jersey, while others, including Oilers goaltender Ben Scrivens, questioned why the jersey was used as the medium to send a message.

“I’m from (Edmonton). You’re not just disrespecting guys in the room you’re disrespecting guys who wore the jersey before us … Messier, Gretzky, they all take pride in wearing that jersey. You’re a fan, you get to say and do whatever you want, call me whatever name you want, but when it comes to that logo, that’s a sacred thing for us. It’s disheartening for me to see our fans treat it that way.” (Canoe.ca)

The crumpled jersey on the ice for all to see was significant because it was an extreme response to a poor performance. It brought to light the narratives, history and meaning we each have as fans of the team. And, aside from the disrespect to the past players as Scrivens pointed out, the toss of the jersey also challenged and disrupted the traditional communication channels sports fans have established with their team.

Part of being a fan is being subjected to a wealth of uncertainty. Teams go through numerous short periods of success and, in Edmonton, mostly failure, carrying along an entire fan base for the ride. Fans go from moments of elation to periods of despair very quickly depending on the team’s performance. And with any emotion comes some form of personal expression, encompassing the values and ideals of an individual, across various communication channels.

In sports, any expression of fan emotion is typically in a social environment. Whether fans cheer or mock their club’s performance, it’s typically done as part of a group. A big reason why social media has become a significant tool for fans is because it allows for information and opinion sharing amongst a community that holds similar norms and values. Watching the game, whether it be at the arena or at the pub, fans function as a collective to communicate the group’s message to the team. It’s part of the ritual fans have established and serves as an integral part of their relationship with the team. Social media holds true to the ideals of fan communities without significantly disrupting the relationship fans have amongst themselves and with the team.

A jersey being tossed by one fan, however, goes against the fan communities norms and values. It puts the focus on the individual who makes a statement on his own behalf and creates tension with fans who may or may not agree with the message. Tossing the jersey goes against basic ideals held by most fans, such as loyalty to the team and social value. And it goes against the collective nature of fans who work together to develop and send messages to the team. One could argue that social media is an individualistic act similar to tossing a jersey, especially when insults are regularly directed towards the team online. But social media allows for and supports the interaction with other online participants. Compared to social media environments, a jersey toss is a one way, abrupt, statement to the team with little room for extending any dialogue or discourse with fans. Without the social environment fans are accustomed to, the message in the jersey toss will be altered and eventually lose any sort of value.

Oiler fans can continue littering the ice as they please. But those that throw the jersey must be aware that the message they intend to deliver will change because of the one-way, isolated, communication medium they have selected.