Could Chicago’s powerplay become a factor in their qualifier series against Edmonton? A look into their regular season struggles and some of the key underlying issues.

One of the storylines coming out of Chicago’s training camp ahead of their playoff series against the Oilers is around getting their powerplay going, which was one of the league’s worst in the 2019/20 regular season. The Blackhawks ranked 28th in the NHL scoring only 5.31 goals per hour, ahead of only the Senators, Red Wings and Ducks. And they were well behind the Oilers who finished first in the league scoring over ten goals per hour, which was a major factor in their second place finish in the Pacific.

Below are the top five and bottom five teams when it came to goals scored per hour (GF/60) on the powerplay this past regular season. I’ve included for each team their rate of unblocked shot attempts or Fenwick per hour (FF/60), a proxy for scoring chances, the actual shots on goal per hour (SF/60) as well as the team shooting percentage. At the bottom of the table I’ve also included the league average rates for each metric over the previous three seasons for additional context.

The fact that the Blackhawks could only muster 33 goals with the man-advantage – and on top of that allowed eight shorthanded goals (tied for 7th highest in the league) – is definitely troubling for a club that actually broke even when it came to scoring at even-strength (5v5) and had the ninth best penalty kill in the league, allowing 6.34 goals per hour. Put another way, had their powerplay converted their shots into goals at even a league average rate (13.20%) instead of 10.58%, they would have scored 41 powerplay goals instead of 33. An additional eight goals would have boosted their overall goal differential from -6 to +2, and likely much closer to a wild card spot. Thanks to the playoff format they still made it, and key players like Kirby Dach recognize the importance of having an efficient powerplay heading into a competitive tournament.

“I think power plays in the playoffs are a huge thing to gain momentum,” he said. “As a group of power-play players, we know that the regular season was kind of unacceptable and that we have a lot of growth to do there to help our team win. I think the way we’re moving the puck now and making plays, hopefully it can all come together and be a factor for us against Edmonton.” (Source: NBC Sports – Chicago)

Aside from their terrible team shooting percentage on the powerplay, the Blackhawks also had issues generating scoring chances and shots on goal this past season, ranking in the bottom ten league-wide and well below league average rates. And it was an issue all season long as the club didn’t appear to make any significant changes to their overall tactics or player deployment that would have perhaps increased their odds of scoring. Another potential reason for their lack of scoring chances could be that over 25% of their shot attempts on the powerplay came from defenceman, typically from areas of the ice with a low probability of goal-scoring. In contrast, less than 18% of the Oilers shot attempts on the powerplay came from defencemen, as we know the club often moved the puck into higher danger areas where the forwards could do their magic. 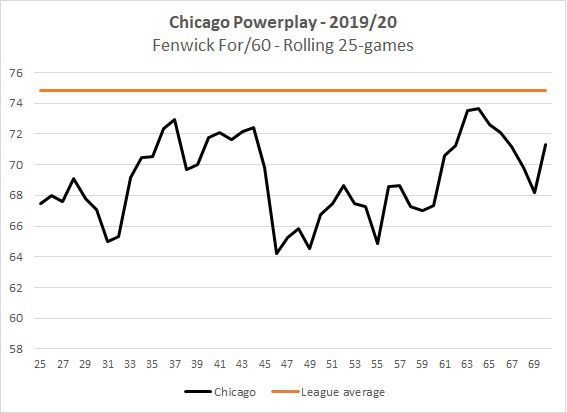 What’s interesting is that closer to the end of the season the Blackhawks did start generating closer to league-average rates of unblocked shot attempts, which really isn’t too far off from where the Oilers finished their season when it came to the same metric. The difference of course is that the Oilers’ top players were prolific converting their chances into goals, with players like McDavid, Draisaitl leading the way scoring over 40 points and getting support from the likes of Nugent-Hopkins, Klefbom, Neal and Chiasson.

Chicago wasn’t as fortunate, as some of their key contributors from the 2018/19 season didn’t perform nearly as well. In the previous season the Blackhawks powerplay finished 13th in the league scoring 7.26 goals per hour and generating just over 71.0 unblocked shot attempts per hour – both numbers being right around league average. That season, Kane led the way with 30 points, Debrincat had 24 points and Toews had 23 .

This past season, Kane continued to lead the way scoring at about the same rate of points per hour (5.33) as he did in 2018/19 (5.99) but seeing a slight dip in his own rate of shots for per hour, finishing the season with 23 points. Debrincat saw his total rate of points per hour drop from 5.38 to 3.97 per hour, due in large part to his personal shooting percentage dropping from 25.0% to 21.74%. Worth noting too that Debrincat’s even-strength shooting percentage took a much more significant dive down to 4.76%, which may be an outlier considering that in 2017/18 he shot 12.68% in 82 games and in 2018/19 he shot 15.29 in 82 games. Can probably expect that to turnaround eventually, at even-strength and on the powerplay, maybe even after a three month layoff.

The player of most interest, to me at least, is Toews who scored only one powerplay goal and assisted on seven in 2019/20. He was getting around the same amount of ice time and generating the same rate of shots on goals, but just couldn’t convert on his chances posting a personal shooting percentage of only 2.63%. That’s a major drop considering that his personal shooting percentage over the previous five seasons on the powerplay had been 13.7%. He’s remained effective at even-strength this year, but for the Blackhawks to be competitive they’ll need their captain to be more productive on the powerplay.

Here’s how the powerplay units are shaping up in training camp (Source), with Kubalik moving up to the first unit and looking to make an impact with increased opportunity. He had an outstanding regular season scoring 30 goals, with 23 at even-strength, but ranked fifth on the team in total powerplay ice time behind Kane, Toews, Debrincat and Strome, and sixth in terms of minutes per game.

One other thing to consider is on the Oilers side, where their goaltending on the penalty kill had been outstanding finishing the season with a league-best 90.61% team save percentage. Among 55 goaltenders who played at least 100 minutes shorthanded in 2019/20, Mike Smith ranked first with a 91.80% save percentage, while Koskinen ranked sixth with 90.10%. Both also finished in the top five when it came to goals saved above average. Keep in mind though that Mike Smith’s shorthanded save percentage was 86.5% in his previous three seasons, much closer to league average rates, and Koskinen posted an 85.4% save percentage in his previous 55 games. Both goalies could potentially regress to league average rates and it remains to be seen if the Oilers can control the shots and chances against as they were allowing the ninth highest rates in the league shorthanded over the final twenty five games of the season.

With both teams having plenty of time to watch video and game-planning for one another, it’ll be very interesting to see how each side does on special teams and if the success and failures from their regular seasons carry over to the tournament.

Also posted at The Copper & Blue.

One thought on “Powering up in Chicago”

Couple thoughts on the Oilers, Ken Holland and the Duncan Keith deal.