With the NHL trade deadline one month away, the Oilers will have a chance to make some important decisions that could impact their short term goal of qualifying for the 2017 playoffs and the long term goal of establishing a window where they can be legitimate Stanley Cupcontenders.

In terms of short term needs, the Oilers could use an upgrade to their center depth as well as their right side up front. There’s also an obvious need when it comes to goaltending as Cam Talbot, who has arguably been the Oilers MVP, does not have a reliable backup that can give him a night off from time to time. There’s also a case to be made that the team could use an offensive defenceman to support the powerplay, but the team should probably refrain from spending significant assets to acquire. The issue for the Oilers is that they don’t have a lot to give up, as their own prospect pool isn’t very deep and the picks they have for the upcoming draft are needed to replenish it.

The Oilers do have veteran players like Benoit Pouliot and Matt Hendricks that could draw some attention at the deadline, but the Oilers are not likely to acquire significant pieces by moving either of these two. Both have struggled this season, although Pouliot does have a history of contributing to a team’s offence and could provide a team with skill and experience in a top six role.

Where the Oilers could tap into to address their short term and long term goals is their defence. For the first time in a long time, the Oilers have an NHL-calibre defence core, with Andrej Sekera, Oscar Klefbom and Adam Larsson signed with the team for the next four years on reasonable contracts. Add to that core Brandon Davidson, Darnell Nurse and Matt Benning, players that will be under team control for a while, and the Oilers have a group that should provide stability on the back end.

This brings us to Kris Russell who was signed by the Oilers to a one-year deal just days before the start of the 2016/17 regular season. Serving as a well-priced stop-gap, having Russell on the roster allowed the Oilers to keep some of their defensive prospects like Griffin Reinhart and Jordan Oesterle in the AHL to continue their own development. The Oilers have been able to rely on Russell quite heavily, as he’s led the team in average ice time per game and has a respectable goal-share of 51.6%. He has spent a significant amount of time with Connor McDavid this season, which would help his numbers, and he’s also been benefiting from a 94% save percentage when he’s on the ice for most of the season, which is not exactly sustainable.

We also know that a team or players on-ice goal-share is not a good predictor of future success, so we look at the share of shot attempts which correlates better with future goal-share. Russell currently ranks last on the team among defencemen when it comes to on-ice Corsi For% (score and venue adjusted) at even-strength (5v5), as the team has had 46.55% of all of the shot attempts with him on the ice. When he’s not on the ice, the Oilers have a Corsi For% of 52.37%, which is a significant jump. Now it can be expected that the share of shot attempts would improve when Russell isn’t on the ice as he has faced better competition, but it should not increase that significantly. For instance, when Adam Larsson, who has also been playing top lines, is on the ice, the team has a 50.31% share of all of the shot attempts. That share increases only slightly when Larsson is on the bench, going up to 51.52%. 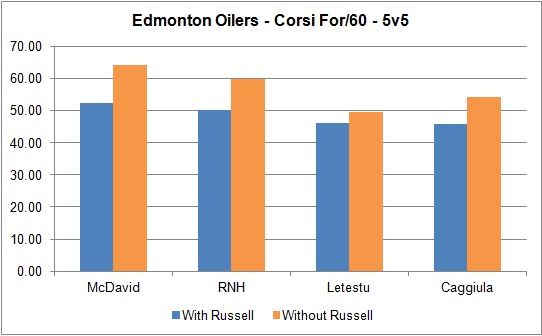