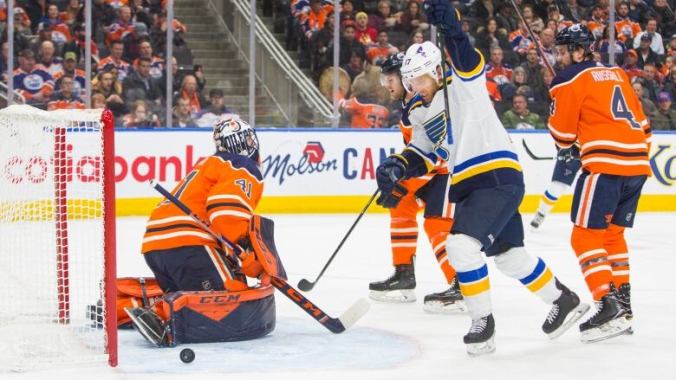 The west is a mess.

It’s remarkable that the Oilers are currently 14th in the NHL when it comes to points percentage with 58.2%, but 4th in the western conference.

The harsh reality is that there are no powerhouses in the Pacific division and really only two in the western conference – St. Louis and Colorado, both posting a points percentage around 65.0%. Things remain wide open for the Oilers to make the playoffs and even potentially finish first in their division, and it remains to be seen if there’s legitimate competition that could derail those plans.

To get a sense of how the Oilers stack-up against the rest of their division and the conference, I looked into how each team has done so far this season, what their results have looked like at even-strength and how they’ve performed on special teams. I also wanted to know how well each team controlled the flow of play as measure by shot-share metrics like Corsi and Fenwick.

With playoff positioning on the line and the trade deadline coming up, we can start to see which teams are legit and what their strengths and weaknesses are. In my mind, more than half of the teams in the league aren’t good enough to make a real run this season and are banking on a lot going right. These teams should really be leveraging the trade deadline to collect assets and build for next season instead of losing value which most teams end up doing. And when we look at each team’s numbers, you can start to see which of these teams are in need of a tweak and which ones need a massive overhaul, best dealt with in the off-season.

Below is a table of the western conference teams sorted by their points percentage prior to the games on February 10th, 2020. I’ve included each team’s even-strength (5v5) results as reflected by goals for percentage (GF%) and goal differential, as well as the underlying shot-share metrics such as Corsi For%, Fenwick For% and Expected Goals For% to capture how well the team does controlling the flow of play. Team shooting percentage and team save percentage has been included to capture individual drivers that may be impacting the overall results. A glossary can be found at the end of this article.

I’ve also included each team’s special teams (ST) results, combining the goal rates for and against on the powerplay and penalty kill (ST Goals/60). The ST Fenwick/60 metrics captures how teams have been doing at generating and preventing unblocked shot attempts on special teams. This metric gives us a sense of which teams are doing the right things tactically and process-wise, but may be getting sunk by a lack of finishing ability on the powerplay or poor goaltending on the penalty kill. 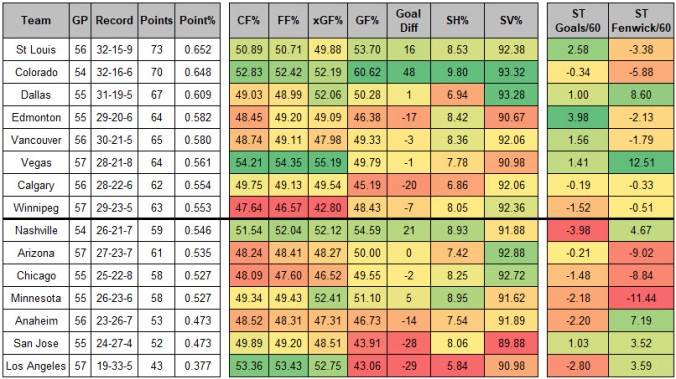 Starting from the Oilers perspective, the first thing to note is that their even-strength (5v5) goal-share ranks 12th in the west with 46.38%, a -17 goal differential, only ahead of Calgary, San Jose and Los Angeles. They are getting good production from a second line now, but they still lack talent and scoring depth up front. The other issue is their goaltending, which ranks as one of the worst in the league at even-strength and hasn’t received the criticism it deserves.

The penalty kill is where the goaltending is really driving positive results as the team allows the tenth highest rate of unblocked shot attempts against but are getting bailed out regularly. The powerplay has also been outstanding this season, although the results have begun to slip over the last twenty-five games both in terms of unblocked shot attempts and actual goals. If the Oilers are going to rely on their special teams to make up for their poor even-strength results, they need to get things back on track right away or risk losing ground in the playoff race.

Where to start with the rest of the western conference.

Safe to say that the California teams are not going to make it this season due to their goal-differential at even-strength and their poor results on special teams. Worth noting that all three teams have been doing well when it comes to generating and preventing shot attempts on special teams, but clearly lack the scoring talent and goaltending to remain competitive. It’ll be interesting to see how these three teams approach the off-season as there are foundations to build from, especially with the Kings who have been posting positive shot-share metrics all season but can’t finish or buy a save.

Nashville is really interesting having posted an excellent even-strength goal-share and positive underlying shot-metrics, but can’t get it together on the powerplay or the penalty kill. They have a good roster on paper, but I wonder if the Preds do what the Blues did two trade deadlines in a row and make moves geared towards winning next season. And somehow they’ll manage to remain competitive in the playoff race.

Vegas is the other team that’s done a lot right but hasn’t been able to separate themselves from the rest of the pack. Similar to Edmonton, goaltending has been a major issue for them and their special teams results cooled off considerably from the start of the season. Still think they’ll figure things out eventually and finish first in the Pacific, even without making a single move at the deadline.

Dallas could use more finishers. They’re doing alright in terms of shot-share metrics and getting great goaltending, but only have a +1 goal differential. Minnesota sitting 12th in the western conference has a better even-strength goal differential but are being let down by their terrible special teams. Goaltending wins playoff rounds, so good luck to whoever faces Dallas.

Calgary and Winnipeg I think are two teams at risk of losing their playoff spots. Both rank in the top eight, but there’s major warning signs starting with their overall goal-differentials. Calgary appears to be sunk by poor finishing, while the Jets are one of the worst in the league in terms of shot-share metrics, consistently getting out-shot and out-chanced. And neither team has a lot going on on special teams.

Hopefully the Edmonton Oilers are aware of their situation, and understand what’s been driving and what’s been dragging their results and their competitions. And it’s especially important in the cap era to keep tabs on the rest of the division and conference in an attempt to find any sort of competitive advantage. We know every Pacific division team has depth issues right now and will look to address their situation either through their draft/development program or via trade and free agency. It’ll be up the Oilers now to use whatever information available to make critical decisions both now and in the off-season to take advantage of a weak division and conference.

One thought on “Tracking the Western Conference”

Had a chance to recap the Oilers season on CBC Radio Active this evening and share my thoughts on the team's priorities this summer.