Since Oscar Klefbom’s injury, the Oilers have gone 3-7-1, collecting seven points in eleven games – a 0.318 points percentage, third worst in the league.

Below are the team’s underlying numbers, each of which have ranked in the bottom five league-wide. So not only have the results been bad (42.00% goal-share, and a -8 goal differential), but the key drivers to success such as possession (Corsi), shot quality (Fenwick) and scoring chances have been poor as well.

Obviously a big factor in all of this is the injury to Klefbom who had bounced back from an injury plagued 2017/18 season and was the Oilers best defenceman over the first 31 games. He was playing in all situations, against top competition and posting excellent numbers. With Klefbom on the ice, the Oiler’s controlled more of the play and were often getting more opportunities in the offensive zone, which were reflected in his on-ice numbers.

With that in mind, it’s not all that surprising to see how badly the team’s shot-share numbers have cratered without Klefbom and with increased minutes for Darnell Nurse, whose on-ice numbers from the first 31 games are almost the complete opposite from Klefbom’s (more on that later).

I’ve plotted out the team’s rolling 10-game Fenwick For%, which captures the Oilers share of unblocked shot attempts, a good proxy for shot quality and is used to predict future goal-share. You can see that the team started taking a slide at the 31 game mark when Klefbom was hurt. 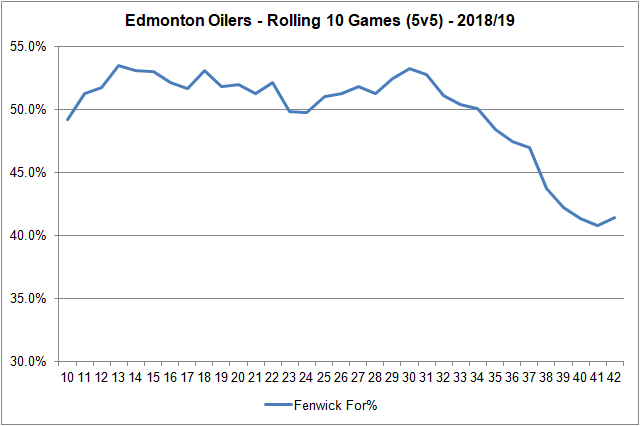 Now if you lost your best defenceman, who is known for his offensive ability, who skates well and who can make passes up to the forwards – and your results have been garbage after his injury – what type of player should you try to replace his minutes with? And if you need to enter the trade market, what should you be shopping for?

The Oilers decided on December 31st, after seven games without Klefbom, after increasing Nurse’s minutes and seeing him struggle, that what they needed most were stay-at-home defencemen. They decided to look at the goal metrics, a highly volatile metric that doesn’t predict future goal-share very well, focusing on the 31 goals against in seven games. They moved away future assets to address this need, which was based on a metric that doesn’t correlate with future goal-share and wins, including a draft pick in the top 100 and valuable cap space for next season.

Had they looked at the team’s shot-share metrics with and without Klefbom in the line-up as part of their information gathering, they may have come away with a different conclusion and focused on addressing their real problem.

Below is the team’s rate of unblocked shot attempts (Fenwick) for and against per hour, broke out into rolling 10-game segments. I’ve chosen Fenwick for this exercise as defencemen have a greater impact on these numbers, as it excludes blocked shot attempts. I’ve also included a black line to represent the league average for both Fenwick-for and Fenwick-against per hour, which is currently 42.5. 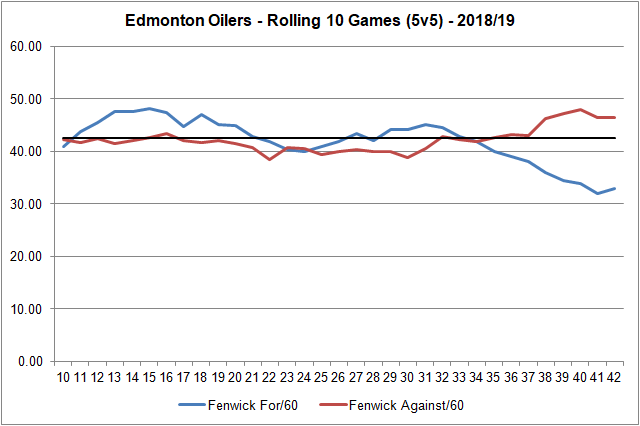 The unblocked shot rates for, on the other hand, is what took a bigger hit after Klefbom was hurt in game 31. The team has struggled since offensively, posting a league worst 33.4 Fenwick-for per hour in their last 11 games, deviating much further from the league average (42.5) than their rate of Fenwick-against (46.4).

So while it’s true that the team had allowed 31 goals in those seven games that triggered a trade, it’s largely because the team could not sustain any offence in the opponents zone – something that Klefbom had a big impact on.

It’s been fairly obvious for some time now, dating back a few seasons, that the Oilers do not have the depth to replace Klefbom’s unique skill set. Nurse saw his minutes increase in Klefbom’s absence but his performance has been poor, something that was expected considering how much he struggled in the first 31 games this season. 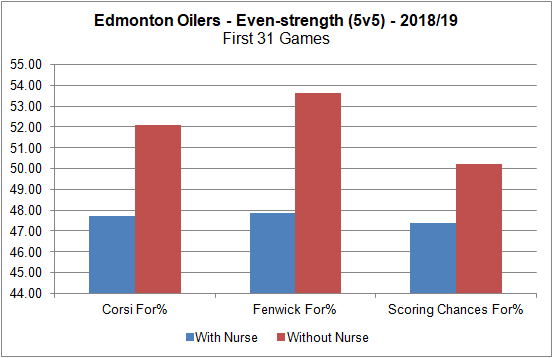 This current issue is also a good reminder that the Oilers continue to base their roster decisions on poor and shallow information, and have continued to bleed assets chasing solutions for problems that don’t exist. The two new defencemen, one of which has been healthy scratched already, aren’t going to solve the Oilers offensive problems, no matter how tough or “mean” they are. The solution now is for Klefbom to return to the line-up and for the team to change how they assess team defence and better understand its importance to goal scoring.

Until then expect their underlying shot-share and results to stay the same.

One thought on “Paying attention”