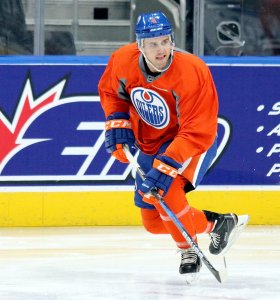 Appears that we won’t be going a day without hearing how great defenceman Kris Russell is for the Oilers, or how bad his underlying numbers are.

The original debate over Russell started last season when there was speculation that he and his agent were asking for a big pay day from the Flames. Here’s what TSN’s Bob McKenzie said back in February. (Source: TSN)

Here’s the thing: Russell is currently a fantastic bargain with a cap hit of $2.6 million. More nights than not, he plays well over 20 minutes and, at age 28, with his mobility and puck-moving ability, he’s a heady if undersized blueliner who’s pretty much in his prime and arriving to free agency at a very good time for him. The next deal Russell signs will be the best deal he ever signs; he’s going to more than double his current salary.

You don’t have to look very hard to find the guys Russell would view as open-market comparables: Montreal’s Jeff Petry got five years at $5.5 million. Edmonton’s Andrej Sekera got six years at $5.5 million. Similarly under-sized blueliner Jared Spurgeoncollected $5.2 million per year on a three-year term in Minnesota.

Were Russell to go to July 1, is there any doubt he’s going to get a five-year offer for between $5 million and $5.5 million? And he may well be looking for more than that, both in term and dollars.

Having watched him play in Calgary and reviewing some of the shot metrics, I thought this was absurd. But knowing how teams operate around free agency, it wouldn’t have surprised me if Russell and his agent were successful. Plenty was written about Russell leading up to the trade deadline and free agency as the player’s on-ice performance didn’t quite jive with the narrative of him being an effective defenceman. (TSN, FlamesNation, Hockey PDOcast, Stanley Cup of Chowder).

When the trade deadline rolled around, the Stars paid big to land Russell, which really gave those that dislike advanced stats some ammunition as a good general manager like Jim Nill acquired him. Russell found himself in a depth role with the Stars, who eventually lost in the second round against the Blues.

Following the playoffs, the Stars did not sign Russell and not a single team traded for his rights. Free agency rolled around, plenty of chatter, plenty of speculation about which NHL club would sign him. But then silence the rest of the off-season.

The hold up on Russell is if clubs like @CanadiensMTL @MapleLeafs @VanCanucks go 6 yrs on ballpark 5m aav. #SigningSeason

Three days before the season started, and after training camp, the Oilers signed Russell to a one-year, $3 million contract. In my opinion, it was an okay move as the team added an experienced defenceman that I hoped would push young defenceman like Nurse and Reinhart further down the depth chart. What’s frusrating is that the team failed to address a need on the right-side who could contribute to the offence and add an effective right-shot on the powerplay. What also became apparent is the fact that all 30 NHL teams figured Russell out and determined his value isn’t near what his agent had thought.

Fast forward to today, Kris Russell has played 13 games, mainly paired with Sekera, averaging 20 minutes per game and has three assists. He’s also last on the team when it comes to the team’s share of Corsi For and Expected Goals. He had a good start to the season, struggled in the games leading up to his injury, and has been alright since returning to the lineup. He’s an NHL defenceman who can provide a team with depth and experience. But he doesn’t drive offence or supress shots against and needs to be sheltered to be effective. Where he ranks on the current depth chart and what the defence pairings should be is worth discussing. But I don’t quite get why Russell has so much support when he plays one good game. It’s pretty pointless to use Russell to discredit shot metrics, as team managers and scouts came to the same concensus as the stats when he was available in free agency.

Really, the big question should be how much Russell is worth to the Oilers in terms dollars and term. I suspect most would agree that he’s not a $5 million per year player. But that to me is a more interesting discussion rather than the Russell-proving-advanced-stats-wrong narrative.