The Oilers powerplay currently ranks 19th in the league, converting on 16% of their opportunities this season. One of the big reasons why they haven’t done so well is because of the poor shot production with the man advantage. This is an issue that’s lingered since last season, with the coaching staff often preaching the importance of getting shots through and finding second chances around the net (Source: Inside Sports, 630 CHED). As of today, the Oilers rank 20th in the league when it comes to the rate of unblocked shot attempts (i.e., Fenwick For per 60 minutes), sitting at 62.15. This is slightly down from last season when the club generated just over 63 unblocked shot attempts per hour.

What I found last season when looking at the powerplay, was that the Oilers generated more shots when veteran Mark Letestu was on the ice. He finished the 2015/16 season with the fifth highest ice time on the powerplay, behind Hall, Sekera, Draisaitl and Eberle. This was in large part because of injuries to Klefbom and McDavid, but nevertheless, Letestu was effective in driving the team’s overall shot rates.

This season, Letestu has only played 17 minutes on the powerplay through 18 games, which ranks him 10th on the team among the regular skaters just ahead of rookie Jesse Puljujarvi. (Source: NHL) 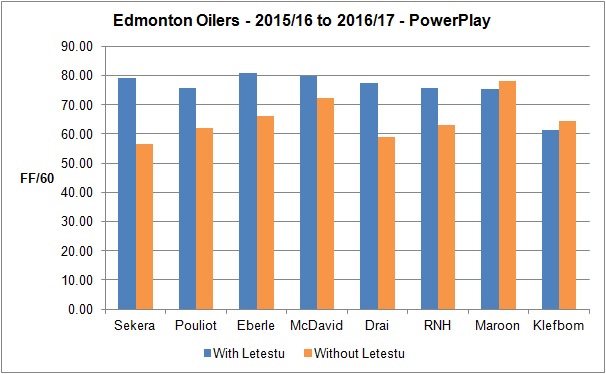 Couple thoughts on the #Oilers progress this season and the various drivers.