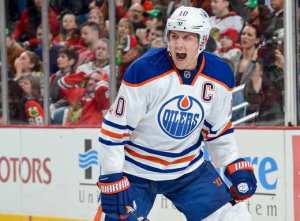 Any hopes of Shawn Horcoff playing one more season in the NHL were put to rest this morning as he officially accepted a new front office role with the Detroit Red Wings. While I do think he’ll eventually be part of a coaching staff one day, starting off in a player development role suits him just fine for now.

He was absolutely one of my favorite players, mostly because he was a solid centermen, but also because his work was often overlooked and taken for granted. He was also a reason why I got into shot-based metrics like Corsi and Fenwick around the time the advanced numbers were taking off. Many times, you would see him play against the best lines, prevent bad things from happening, and then skate off the ice with nothing really to show for it. But when we started getting access to time on ice numbers and started to see how much the team relied on him to play against the Sakic’s and Yzerman’s, you began to appreciate how much he meant to the franchise.

He also represents to me an era of the Oilers that will never get a lot of praise, but one that I’ll always be attached to. Now I have nothing against the dynasty Oilers and obviously appreciate and respect their accomplishments. But I was too young to really be into hockey in the 80’s, and really have zero attachment to that era and those players.

Instead it’s been the Oilers since 1997 that I’ve had an attachment to and identify with. Every move the team has made, every season, the players, I feel like I have my own story to tell and my own interpretation of the events. So following the career of Horcoff, from his draft day to the 2006 playoff run, to the trade to Dallas, to his season in Anaheim, there’s a sense of loss with the news of his retirement, but also a renewed sense of connection to a player that accomplished a lot over the course of 15 seasons.

Below are the links to articles I’ve written about Horcoff. Included in those links are the numbers he posted as an Oilers, but also a review of his performance in Dallas, where he was a solid depth player, and Anaheim, where he continued to be a reliable utility player and saw his ice time gradually increase.

One thought on “Couple Thoughts on Shawn Horcoff”

Couple thoughts on the #Oilers progress this season and the various drivers.