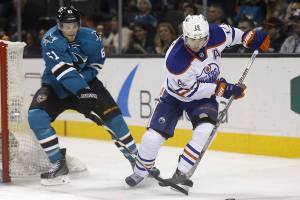 Bringing in an elite level NHL coach is going to go a long way in turning this franchise north. The addition of Todd McLellan and his coaching staff, along with the continued development of the young core, is worth getting excited for heading into the 2015/16 season.

Over the past seven years, McLellan posted some very nice possession numbers, as the Sharks consistently out-shot their opponents and won a lot of regular season games. One thing to note is that the Sharks were a bit of a high event team when it came to shot attempts. In the last four years, the Sharks finished in the top four when it came to the total number of Corsi events (for and against) per 60 minutes at even-strength (score adjusted).

I don’t think this is too concerning since they would still win a lot of games  (except for the most recent year). What’s also worth noting is that the Sharks blocked a high percentage of shot attempts against, typically finishing in the top 10 league-wide.

What does it all mean?

What I’m thinking is that the Sharks block a high percentage of shots because they cut off passing lanes and forced teams to take weaker shot attempts that the defenceman anticipated. And when they’re on the offensive, they’re either shooting early or finding their shooters and getting as many pucks towards the net as quickly as they can.

Watching the Sharks beat the crap out of the OIlers every year, I’ve noticed that they never have a lot of pinching defenceman and quite often let their forwards shoot the puck on net as soon as they enter the zone. If McLellan brings along some of his set plays, we should see the centers take on a more prominent role and have defenceman playing, you know, defence. If McLellan had his players blocking a high percentage of shot attempts against, it’s likely because players stay in position and read the play.

The Oilers have historically been a high event team but for the wrong reason. It’ll be interesting to see how McLellan will generate shot attempts and which players he’ll rely on to drive the play. And if he is successful, we should expect the Oilers blocking a higher percentage of shot attempts than they have done in the past. It’s obviously a big part of McLellan’s game plan, so I’d expect to see it happen in Edmonton.

We know that the Oilers have really lacked some of the key fundamentals to being a decent possession team. A combination of poor roster construction (especially on defence) and weak coaching tactics have made the Oilers an easy team to play against. With McLellan behind the bench, we should see an improvement in the team’s possession metrics and (hopefully) see the results on the score sheet and standings. This will of course depend on how well the current group of prospects develop, especially when it comes to defence.

Curious to hear what others think and what tactics/plays we should expect next season with McLellan. This will likely be part one of a series of post as I dig into the numbers and get a better sense of McLellan’s coaching style. Feel free to leave a comment below or send me an email at sunilagni23@gmail.com.

3 thoughts on “Sharks Under McLellan”