After losing to the Boston Bruins in game seven of the 2011 Stanley Cup Finals, people took to the streets of Vancouver and began a riot. Stories and photos can be found here:

While watching the CTV News live feed, as well as seeing images on Twitter and Google Realtime, I couldn’t help but notice how many people stood around the madness and took pictures with their smart phones. One can assume that these were used to share over social media (Facebook, Twitter, etc) but also to send to friends who weren’t there.

Social media tools are higly personable. In an attempt to capture that personal experience of an event such as these post-game riots, people stood in the masses and risked their well being. To let people know that they were there, people slowed down police efforts and contributed to the escalation of violence and chaos.

But as embarassing as this event was toVancouver, there is some good news coming out this morning. According to Mashable, over 8,000 people have joined a Facebook group aiming to clean up the mess the rioters left behind. Meanwhile, the RCMP is asking for people to share photos and geotag locations in order to find and charge rioters. A Tumblr page (Vancity Riot Criminals) has also been set up to submit photos and identify rioters. 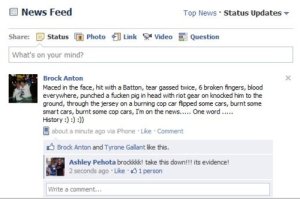