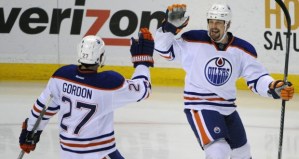 My prediction at the start of the year was that the Oilers would finish between 10th and 12th in the west. RNH was recovering from shoulder surgery. Gagner got hurt in pre-season. And, compared to playoff teams from last year, the Oilers defensive core lacked NHL talent and experience. Add to the fact you had a coaching staff with very little experience and a very young top-six, I just couldn’t see this club making the playoffs as a wild card.

Going through my Oilers posts from this season, I’ve compiled what I think were the positives (believe it or not, there were some) and negatives.

END_OF_DOCUMENT_TOKEN_TO_BE_REPLACED 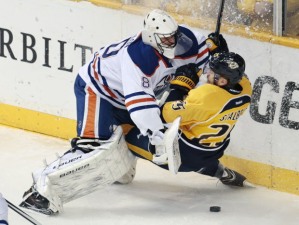 Since beating the Flames on November 16th on Hockey Night in Canada, where they scored four unanswered goals in the third period, the Oilers have won four of their last five games. The winning has significantly reduced the number bogus rumors and there haven’t been any player agents stealing headlines during this stretch either.

But even though the memory of the three straight shutout losses at home are fading, the conference standings are still a harsh reality.

Ilya Bryzgalov also got his first start as an Oiler, shutting out the Predators last night, and is likely to get another start tonight against the Blue Jackets. I typically don’t agree with starting goalies on back-to-back nights, considering Dubnyk is playing pretty well, but it’s a common decision by the coach to go with the mythical “hot hand”.

#Oilers with 17 hard or dangerous shots on Nashville net from slot, #Preds with just 10. #ejlive

The Oilers played a pretty solid game last night as well. The improved scoring chances for and against by each line combination looked pretty promising, so hopefully they can play well in front of Bryzgalov again.

It’s still pretty obvious that the Oilers lack the strong defensive play to compete in the western conference. It’s been the same story every year since the 2006 squad which included sound defensive players including Chris Pronger. For a while, I thought it was the coaching or gameplans that were at fault. But as the losing seasons pile up, you have to consider some deep rooted problems in the organization.

I’m beggining to wonder if it’s the Oilers assessment of players drafted and acquired that is a weakness here. Assuming that the Oilers have some sort of model or criteria to assess players, there might be some qualities the team is overlooking. Perhaps scouts aren’t looking at deeper performance measures and perhaps letting their biases take over. It’s hard information to uncover, but the on-ice performance and the lack of depth at the centre and defensive positions are enough to question team management.

Another issue is how poorly the team has handled the development of its prospects in the past. Far too often, players have been rushed into the league, without the proper training and preparation. The best example of this is Sam Gagner, who was drafted in 2008 and made the roster when he was only 18.

I’ve always wondered what another season in the OHL and a season in the AHL could’ve done for Gagner. He’s a complete player, but I really think the pressure of playing in the NHL and not getting the right training early in his career has hindered his true potential.  Only in recent years have the Oilers established a solid farm league system, something that was missing when Gagner was drafted.

The Detroit Red Wings have always produced exceptional talent, and I think it’s in large part to their patience with prospects. Every player that gets drafted by the Wings typically completes a few years in juniors and then plays a season or two in the AHL. This included Pavel Datsyuk and Henrik Zetterberg, who both played a few seasons in minor leagues prior to becoming the teams franchise players.

A related article over at The Hockey Writers concisely lists off how to ruin an NHL prospect, using Buffalo Sabres prospect Mikhail Grigorenko as a case study. In summary: rushing a player before they’re ready for professional hockey and setting him up for failure is a sure way to derail a hockey career.

Five ways to run an NHL prospect – The Hockey Writers

If Ken Holland wants to know if the Edmonton Oilers have been good or not this season, he'll need to do more than "rudimentary analytics". A look into the season, and why the #Oilers have been mediocre at best.