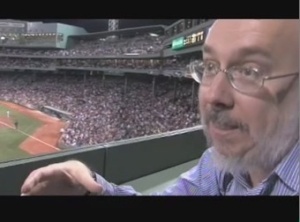 Saw a documentary called Teenage Paparazzo, which follows the adventures of a 14 year old paparazzo and explores the relationship between celebrities, paparazzis and fans. Adrian Grenier interviews different paparazzos, celebrities and academics, including Dr. Henry Jenkins of MIT, and highlights the celebrity-obsessed culture across different mediums.

In a conversation with Adrian Grenier, Dr. Jenkins had this to say regarding celebrity gossip:

Going from a society of small towns where people gossiped about the town drunk to an era of the internet, who do we choose to talk about? We can’t talk about our aunt and our uncle or the guy down the street because we don’t share that in common.

So I would say one of your jobs as a celebrity is to be the subject of gossip. When we gossip about someone, the person we’re gossiping about is actually less important than the exchange that takes place between us. We’re using that other person, the celebrity, the town whore, whatever, as a vehicle for us to sort of share values with each other to sort through central issues that are…

Ironically enough, Dr. Jenkins was interrupted by a fan asking to take a picture with Grenier.

There’s definitely a lot of similarities between those who follow celebrities and those who follow hockey. Aside from both being groups of fans who express their fandom using different outlets, they both engage in gossip.

I remarked last year at the amount of speculation that is prevalent throughout the game of hockey and what causes its generation. Dr. Jenkins’ remarks add another element to the rumor/gossip activity, which is the fan desire to exchange values and ideas with one another. The game itself is the common object to discuss and it’s through the interaction with other fans that allows them to express their own values and ideas.

This opportunity to share is what makes blogging the ideal platform for hockey fans. It’s easy to set up a blog, publish content and discuss with other fans. Blogs also offer a way to keep a running log of fan values and ideas, and have made it possible to link the content across a massive network. Values and ideas are able to develop and evolve over time, which is then used to fuel more gossip and speculation.

Not a Canucks fan but appreciate sports fans and convergence culture.

After the Canucks won game 5 of the conference final against the Sharks, celebrations broke out across the west coast. Around Scott Road, where there’s a huge Punjabi population, a Canucks fan broke out into boliyan, a Punjabi folk verse to celebrate.

Boliyan are prominent around celebrations, such as weddings. Here, the fan decided to blend his culture with hockey and came out with this medley.

Translation of what he said…..

END_OF_DOCUMENT_TOKEN_TO_BE_REPLACED

Digging into the first four games of the series against the Los Angeles Kings to see what’s going well for the Edmonton Oilers, and what the areas of concern are.