I joined host Adrienne Pan on CBC Radio Active this evening to talk Oilers and their activity at the NHL trade deadline.

Big thank you to everyone at CBC for putting it all together!

Big thank you to everyone at CBC for putting it all together!

The Oilers are sliding, and they shouldn’t be surprised.

The good news is that the Oilers currently rank second in the Pacific with 40 points, and fifth in the Western Conference. The problem is their overall results aren’t good enough, especially at even-strength, and they’ve been trending downwards for a while. 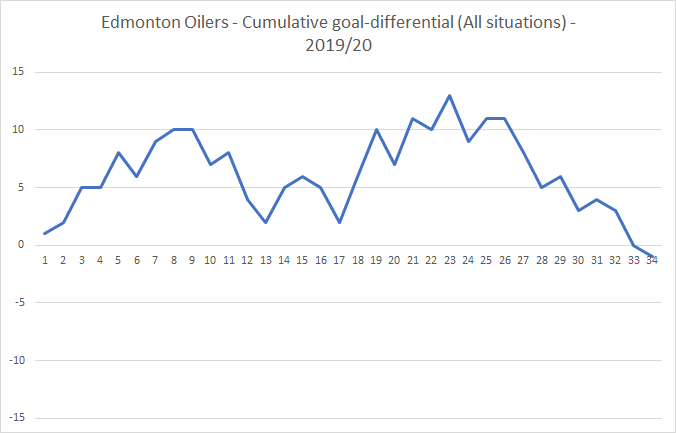 While the powerplay and penalty kill continues to thrive, it’s the even-strength (5v5) play that is dragging down the Oilers overall results. Below is the cumulative total of goals-scored, which now sits at -12 – a goal-share of 45.77%, good for 26th in the league.

The underlying shot-share numbers have been poor, and appear to be getting worse. While they did show some signs of life only a few weeks ago, their overall play has been declining ever since. I wrote last week that I think it had to do with the team potentially trying to generate more offence by focusing less on defensive play, but that’d be something only the coach could confirm.

Below are the Oilers Corsi For%, Fenwick For% and xGoals For% over rolling 10-game segments this season. A glossary describing the metrics can be found below.

The last ten games have been extremely poor, with the Oilers posting shot-share metrics well below league average levels. The expected goal-share has slid down to 45.0%, which again might be due to the team taking more risks in an attempt to generate offence. The Oilers were doing something right early on, but it appears they’ve adjusted their tactics in an attempt to generate offence.

The other concerning issue is the team’s performance at even-strength both with and without McDavid this season. In year’s past, we would see all the shot-share numbers be above at least 51.0% with their best player on the ice. This year, it’s been a different story, as the Oilers even with McDavid have posted shot-share numbers below 50.0%. 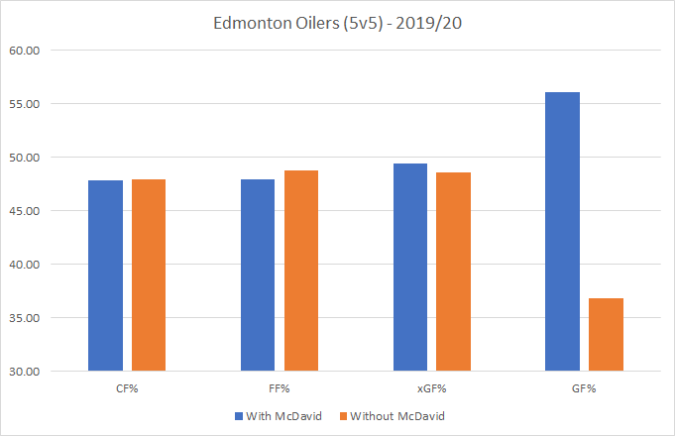 The good news is that the overall goal-share has been outstanding with McDavid. But it does make you wonder how much better his on-ice goal-share and point totals would be if the Oilers were spending less time in their own zone and more time with the puck. The lack of skill on the roster, combined with a blueline that has only a few puck-movers, is what I think is driving the shot-share numbers downward.

The last ten game have been especially concerning, with the whole team including McDavid struggling to generate offence and spending more time defending. Below we see that the shot-share metrics are closer to the 45.0% percent range (!), with the goal-share being below the break-even mark even with McDavid.

Can’t say their current results are too surprising as the team lacks skill and depth, and their shot-share metrics have been below average for most of the season. The question again comes back to the Oilers management and how they view the overall results and where the team has been trending.

With the team having accumulated 40 points, does management think the results are real and sustainable? Or do they recognize that they’re lacking a significant amount of skill and depth in all positions, and start to add pieces, either from their own development system or through the trade market. Thinking heading into the season that this was going to be a development year, and based on their actual results and underlying trends, I would expect the team to hold off on making any drastic changes and start to give some of the younger prospects a chance to play in Edmonton and further their development.

It would have been nice if the team took a positive step and posted underlying numbers that demonstrated sustainability. But the reality is that they’re not good enough to compete for a championship and should be using this season to properly evaluate the prospects that they do have.

Big thank you to everyone at CBC for putting it together!

Couple thoughts on the Oilers off-season and their activity around free agency.

Professional hockey  remains in the dark ages when it comes to managing teams and looking for competitive advantages in the front office. Whenever there is a job opening for a general manager or when club re-structures itself to have an executive overseeing hockey operations, you realize that the list of potential candidates is small and the overall talent pool is extremely shallow.

The Edmonton Oilers at a critical juncture in their history, with the best player in the world and pressure mounting to deliver a championship went down a very predictable path to find a new general manager. They interviewed a number of assistant general managers, sought out the ones with potential and those that had connections to Hockey Canada. And while Ken Holland has the experience, the credibility, the knowledge and the professional network to handle the assigned tasks, his hiring isn’t all that exciting or inspiring. Going with Holland perfectly exemplified the Oilers risk-averse nature, their conservative approach to building a championship contender, and their lack of innovation and creativity when it comes to finding any competitive advantages in the modern era.

Now Holland does have a history at finding inefficiencies in the market when constructing a roster, being one of the first to tap into Europe for players and discarding one-dimensional enforcers from his teams. The problem is that the rest of the league caught up to him fairly quickly, and in the salary cap era he hasn’t done anything that sets him apart from his peers. He’s also shown a lack of understanding when it comes to player’s prime ages, giving out a lot of bad contracts with no-trade and no-movement clauses to players who are well past their primes, but he feels a deep connection with. Holland doesn’t appear to have that ruthless nature that’s needed to get the Oilers out of their current cap and roster issues. And we know that in the modern era one of a general manager’s key tasks is to find roster inefficiencies and squeeze out as much production and value from all corners of the club.

The one other issue I have with Holland is his “over-ripening” philosophy when it comes to developing prospects. While I do agree that prospects need time to develop and that a strong AHL program is critical to support the regular influx of talent to the NHL roster – management needs to be able to leverage a player’s entry-level deal and get production from players especially on the third and fourth lines. This would require identifying those players earlier and if appropriate, take on some risk by signing them to team-friendly deals. Again, it’s fine to allow players to develop in the minors, but managers need to be very strategic so that they know what they’re paying for when a player completes their entry-level deal and needs a new contract. Highly recommend checking out Iyer Prashanth’s piece from 2016 on entry-level contracts and asset management related to Holland’s time in Detroit.

Coming to Edmonton, Holland will have a lot of work to do including assembling a coaching staff, improving the roster and addressing the team’s scoring issues when McDavid isn’t on the ice. He’ll need to add a goalie and possibly add more skill to the blueline. And he won’t be able to do any of this without shedding some salary and also getting a better sense of the prospect pool and which players may be ready to contribute at the NHL level.

For me though, the biggest area Holland needs to address is the overall decision-making strategy and processes within hockey operations. This of course will depend on the management group he surrounds himself with, the professional and amateur scouts and (hopefully) a well supported and integrated analytics department. But Holland needs to focus on implementing the right processes that leverages all of that information that’s going to inform the roster construction. Hopefully he can do that and have the support from ownership to get all the resources required including people, technology and infrastructure – but we’ll have to wait and see.

While I do hope that the hiring of Holland is what turns this team around and start competing for championships, I remain fairly skeptical that the Oilers gained any sort of competitive advantage through this hiring.

For one, I don’t have a lot of confidence in the Oilers owner and his ability to allocate the right infrastructure and resources to support the general manager. We’re hearing that Holland will have a lot of control overseeing the entire hockey operations, but it remains to be seen what changes he’ll make to the people and processes in areas such as scouting and player development. Secondly, I don’t have a lot of faith in Bob Nicholson who facilitated the hiring process, had the opportunity to talk to anyone in hockey, but yet picked someone from his own history through Hockey Canada. In his time with the Oilers, the team took a reactive approach to several issues, and he’s a big reason why the Oilers are in the mess they’re in.

Lastly, I have little faith in the current hockey management talent pool. There’s clearly a need in hockey for common sense business acumen and a better understanding of risk management. The fact that the same names from the same demographic with the same type of backgrounds come up again and again makes it obvious that hockey management isn’t progressing. And that an opportunity exists for a team if they want to exploit an inefficiency in their management structure and find a significant competitive advantage.

Joined host @nancyjcarlson on the CBC Edmonton News this evening to share my thoughts on the #oilers hiring of Ken Holland. Segment starts around the six minute mark. https://t.co/gJ6QWSh8nq

I joined Nancy Carlson, the new host of the CBC Edmonton News, for my weekly television segment to discuss all things Oilers. Clip is here and starts at the 19:30 mark: CBC Edmonton News (2019, April 8)

Thanks again to the team at CBC for making it all happen. It was cool to be the first guest on the new set with Nancy!

We are so excited for @nancyjcarlson to make her on-air debut this Monday, April 8th. Join Nancy for @CBCEdmonton News at 6, and to get a look at our new television studio! pic.twitter.com/cUJGhZwR54

Keeping Josh Archibald around is a terrible look for #Oilers management, the coaching staff and the leadership group among the players. Time to move on from him, especially with a solid replacement already at training camp. Latest post is up.

MACT Project by Sunil Agnihotri is licensed under a Creative Commons Attribution-NonCommercial 3.0 Unported License.
Based on a work at www.sunilagni.wordpress.com.
The SuperFan
Create a free website or blog at WordPress.com.
Loading Comments...