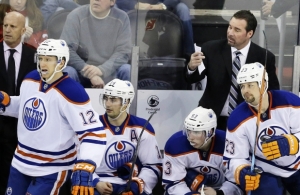 I think the general consensus is that the Oilers look much better now than they did with Eakins. Copper and Blue did put together a nice piece that dug into some of the underlying stats of both coaches to challenge this perception. The bottom line is that the Oilers were a better possession team with Eakins behind the bench, but were sunk by bad goaltending. The Oilers under Nelson have spent less time trailing in games and the powerplay has been very good. Both coaches, however, were not given well built rosters, with defense being a major problem.

What’s become apparent is that Nelson has received far less criticism for his recent 7-game losing streak compared to what Eakins received when the team went on that dreadful 11-game run. Anything over 5 games is cause for concern, but for whatever reason, Eakins and Nelson have been treated very differently. Now granted, the 11-game losing streak was longer and early in the season when expectations were higher, and sunk playoff hopes by December. And of course by February all is lost anyways, so maybe there’s not nearly as much pressure on Nelson to win (and maybe fans want to improve their chances of landing a higher pick in the entry draft). It’s also become quite obvious that those that cover the game as a profession as well as a large segment of fans didn’t like Eakins and have expressed how much better of a person Nelson is. We’ll save that topic for another day.

I thought it’d be interesting to dig into the two losing streaks to see if anything stands out and uncover why some may find Nelson’s losing streak more acceptable and even….encouraging. Quick tale of the tape:

Here’s a breakdown of the time spent (at even strength) trailing or leading and their possession stats in those situations during the losing streaks (Source: Puckon.net)

And here are some of the advanced stats (at even strength, all score situations) for each of the coaches longest losing streak. (Source: War on Ice)

And finally, the special teams. (Source: War on Ice)

So based on the stats alone, which losing streak would be more encouraging? Here are my takeaways:

My guess is that a combination of a solid powerplay, combined with the emergence of fan favorite Nail Yakupov has created this perception that the team is better. It’s a valid assessment, but we can’t overlook the fact that the club is still built very poorly with weak defence and sub par goaltending. The overall perception of both coaches has also played a big part in how their losing streaks are perceived. Both coaches have different personalities and presented themselves very differently in public. The way Eakins was brought in (the abrupt firing of Krueger, the first press conference) was the complete opposite of the the low-key, easy going, entrance of Nelson. All of these things change our perception of coaches and how we interpret their losing streaks.

Just a side note: As for coaching, I think Todd Nelson should be considered for the head coaching position by the Oilers, but it has to be part of a thorough candidate search. AHL coaches like Nelson, as well as Eakins, are well qualified and can bring different tactics to a team. But the only way they can have success is if the roster is built to compete. It’s encouraging to see guys like Lander and Klefbom doing well. But the club will need a lot more growth across the entire roster to be even remotely competitive next year.

5 thoughts on “Losing Streaks: Who Wore it Better?”

Figuring out what’s plaguing Leon Draisaitl might be the key to solving the #Oilers issues at 5v5. A look into his productivity and on-ice numbers - all of which have dropped this season.