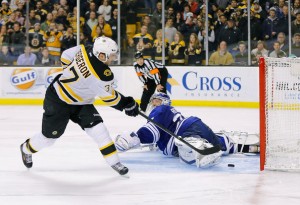 Originally posted at Hockey in Society.

It’s been remarkable to see how quickly the field has developed over the past few years. The amount of new information being derived from hockey analytics has grown and continues to be discussed across a large and diverse online community. And while the focus has rightfully been on the hockey data and extracting meaningful patterns, it’s important to assess some of the foundational concepts that have supported the development and growing popularity of hockey analytics.

Analytics in any industry is a continuous process. Regardless of what patterns are found, new questions will arise to continue advancing the discussion initiated by analytics. Hockey analytics is no different as it really is a never ending process to uncover, share and build upon new information. Because it pertains to professional hockey, there is new data available almost every day and involves analysis from anyone that’s interested in the topic. The game itself, including the off-ice business (i.e., trades, free agency, draft) is highly chaotic and at times unpredictable.

What makes hockey analytics, or any sports analytics unique, is that it’s being done in an open environment that allows for anyone with basic analytic and communication technology tools to join the discussion. Using blogs and Twitter, participants have created a very collaborative environment that supports discussion and the continuous extension of ideas and information.

Hockey analytics continues to rely heavily on fans, who have embraced the technology and taken control of the online environment, creating a unique role for themselves. Bloggers especially are spending countless hours collecting data and making contributions to the field, mostly without any financial incentives. A few are even painstakingly tracking data manually and making it available for anyone interested. By making a varied amount of contributions, fans are assisting one in another in filtering through the noise and misinformation that tends to surround the game.

The tools to get involved in hockey analytics, whether that means analyzing data or reading summaries, are free and readily available online. This has been critical since having as many contributors as possible from various backgrounds benefits any discussion. Websites such as ExtraSkater, Behind the Net, and Player Usage Chart’s collection and presentation of data, along with simple navigation tools, will be critical for the field. Others have sought donations  to collect data and have found strong support. An important thing to note is how the traditional model of consumption has changed, putting the fan at the centre of information and development and distribution.

The new ideas that come from hockey analytics are being tested quite often and rigorously in a public environment. Fans regularly make predictions about game and season outcomes, but more are basing their decisions on reasoning and logic, and are more than willing to share their supporting evidence. It really is a great example of how new ideas and knowledge is developed in the digital age.

The entire field of hockey analytics continues to become part of regular discussions pertaining to the game. Not only are broadcasting networks such as CBC and TSN providing stats that have really been developed by the online community, but NHL teams have largely taken to some form of analytics as well. It’s also encouraging to see what Nate Silver refers to as “data journalism” grow and give hockey analytics another way to engrain itself in pop culture.

Hockey analytics, being the continuous process that it is, relies heavily on the time and generosity of fans to continue developing. As long as the communication and analytic tools remain easy to access and use and the environment remains open for discussion, you can expect the field to continue its growth. Fans will always demand information, however the traditional model of consumption has changed, forcing long standing institutions to evolve and embrace these new sources of information.

Benkler, Y. (2011). The Penguin and the Leviathan: The Triumph of Co-operation over Self-Interest. New York: Crown Business

Had a chance to recap the Oilers season on CBC Radio Active this evening and share my thoughts on the team's priorities this summer.