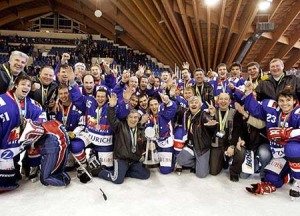 Two hockey tournaments going on right now. The Spengler Cup is an annual tournament in Switzerland for individuals playing in Europe. A lot of former players head overseas for various reasons. Could be the end of their career, maybe they couldn’t cut it in the NHL or perhaps they just enjoy the less rigorous schedule to balance hockey and family life. The tournament itself is pretty entertaining with some tight games. It hasn’t caught on in North America but is very popular in Europe.

The World Juniors Hockey Championships (WJHC) on the other hand, is a tournament for players under 21, who for the most part, are highly touted draft picks with a lot of potential. Ten teams compete for gold, with Canada and US being heavy favorites this year. This tournament is broadcasted by TSN so it gets tons of hype and coverage. It’s a big ratings draw in North America…not so much anywhere else.

So why is the WJHC a bigger draw than the Spengler Cup?

The Spengler Cup has mostly players in the European leagues, so we don’t know much about them. The ones we do recognize are former NHL players past their prime. On the flip side, the WJHC players are all unknowns as well since junior league games aren’t huge draws. Both tournaments have a Team Canada, so national pride can’t be the factor either.

The media machine known as TSN does a pretty good job boosting the WJHC. Player profiles, game analysis, commentators, and expanded coverage on TV and their website all contribute.

The big difference between the two tournaments is the linking and alignment of fans to the product.

The potential of young players is heavily emphasized as most of them are already drafted or will be eligible next summer. The player will always have a familiar NHL team attached to them at all times. Working with the familiar constructs in a viewers mind builds that attachment right away. Spengler Cup broadcasts have less to work with when trying to connect with the familiar. Former players are long forgotten and have established themselves in the European leagues.

Second, since there’s potential in the WJHC, fans have something to take away from the broadcast and work with. The player has time to become a professional, so a fan can watch them develop, follow their stats and make their own judgments over time. It’s also easier and more interesting to discuss potential players with other fans. Guesses can be made about how good/bad this player can be and then eventually be verified. Former players are is less relevant to fans with no real future and thus, less interesting to work with.

It’s easy to blame a mega sports network like TSN for over-hyping an event, but really its collective fan behaviour that dictates what gets coverage and what doesn’t.

Couple thoughts on the Oilers upcoming season and the level of confidence in the management group and coaching staff.