The Oilers are off to a respectable 3-3 start this season, with big overtime wins against the Jets in Winnipeg and Boston at home last week.

The biggest and most publicized issue has been their secondary scoring at even-strength and the lack of production from Leon Draisaitl who has struggled significantly on the second line. His numbers right across the board are poor. Despite playing the third most minutes among Oilers forwards at even-strength, he only has two points (two goals) – good for a rate of 0.71 points per hour. Based on his personal numbers from the past two seasons and the ice time he gets, a rate of 2.0 points per hour should be the bare minimum he should finish the season with.

Over the course of 84 minutes at even-strength (5v5) this season with Draisaitl on the ice, the Oilers have been outscored 6-1 and have posted a Corsi For percentage (a proxy for possession) of 38.67%. The team has seen a significant drop in offence, getting out-shot and out-chanced by a large margin when Draisaitl has been deployed – especially concerning considering he’s expected to be the Oilers long-term solution for scoring depth. 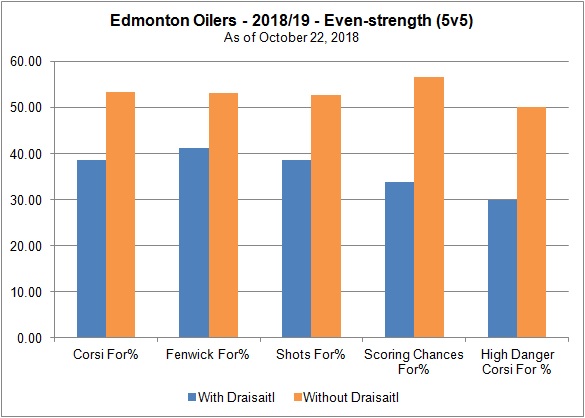 You can expect a slight drop off when comparing Draisaitl’s on ice numbers to his off-ice numbers considering that McDavid is the top line center. But this is just staggering and worth monitoring over the next few weeks.

It’s also alarming to see that even when Draisaitl has been on the ice with McDavid, the numbers are dreadful. What should be considered as a nuclear option for the Oilers has fared very poorly – in 16 minutes together this season at even-strength (5v5), the Oilers have posted a 42.25% Corsi For percentage, and been outscored 2-1 (a 33.3% goal-share). Considering that the two have a long history of playing well together, I don’t think these poor results will last. But I think the concern here should be that Draisaitl could be dealing with a health issue, or possibly a conditioning issue since his pre-season numbers were sub-par as well. It remains to be seen if this is a temporary problem or something that has long term implications.

There are a lot of ways to cut and slice Draisaitl’s numbers this season to show how poor he’s been. My favorite involves McDavid and Klefbom. When Klefbom, arguably the Oilers best defencemen this season, has been on the ice with McDavid, the results have surprisingly been poor – 46.46% Corsi For percentage and a 50.0% goal-share (1 GF, 1 GA) over 53 minutes together. However, if you adjust the numbers to exclude the 10 minutes Draisaitl was on the ice with them, the possession numbers improve drastically – up to 50.5% Corsi For percentage – and the goal-share is 100.0% (1 GF, 0 GA). Anyways…

Quick notes on the Oilers special teams. The Oilers powerplay (5v4) is currently doing well, as they rank 7th in the league with a goals-for per hour rate of 10.39. You can probably expect that number to drop as it’s a fairly high compared to previous league-wide results. The target should be 7.0 goals, which would have them in the top ten league wide. For now, the top powerplay unit featuring five left shooters is getting results, generating unblocked shots (Fenwick) at a rate of 75.0 per hour with McDavid on the ice. That number is right around the league average from last season – but there should be no reason why that number couldn’t climb up with McDavid on the ice.

McLellan is clearly running his top unit as much as he can, with little time given to the likes of Puljujarvi and Yamamoto – two skilled right shot wingers who could help to diversify the shooting options on the powerplay. There’s a very clear drop off in time-on-ice (TOI) here:

Something else to consider when looking at which players are deployed frequently in various game states is the proportion of total time that the Oilers are trailing in games.

A big reason why McLellan is running his favorite guys on the powerplay (and the reason for McDavid leading the league in average ice time) is due to the fact that the Oilers are trailing a lot – fourth most often in the league. The good news is the Oilers have the offensive talent to drive results, unlike in previous years when the team trailed a lot and were forced to rely heavily on rookie defencemen. Now it’s a matter of using the right on-ice tactics to get the most out of the players and to generate scoring chances and goals.

The Oilers penalty kill (4v5) has been alright so far. The club ranks 17th in the league with a goals against rate of 7.89 per hour – which is just under the target they should have this season (7.00). It’s right around league average, and far (far) better than what they allowed last season shorthanded. What’s encouraging is the team defence at 4v5 as the Oilers rank 11th in the league when it comes to unblocked shots against per hour and allow the second lowest rate of scoring chances against. A potential problem worth monitoring is the goaltending as the team save percentage on the penalty kill currently ranks 17th in the league.

Another area worth monitoring is how players are being instructed to play, and if the team will continue relying on low-probability shots from the point. The Oilers currently rank last in the league when it comes to high-danger shot attempts, and fifth last when it comes to scoring chances for. We’re six games in to the season, and the Oilers have plenty of work to do if they want to compete for a playoff spot. The good news is that the team is healthy and the top pairing of Klefbom-Larsson has performed well. What remains an issue is secondary scoring, a flaw that has existed for the last two seasons, with the pressure on Draisaitl to produce expected to increase. And we can definitely expect a lot more questions about the coaching tactics if the team can’t produce scoring chances or if the special teams begins to collapse.