Joined Lowetide this morning on TSN 1260 to discuss the Oilers. Full audio below, starting around the 7:40 mark.

As frustrated as I was with RNH breaking his hand trying to block a shot, I can’t say I was too surprised. McLellan has never been averse to having his skilled guys kill penalties. And this past summer when I was looking into the Sharks history with McLellan behind the bench, one thing I found was that his teams blocked a high proportion of shot attempts at even-strength.

Keep in mind, the Sharks were one of the best possession teams with McLellan behind the bench, and often did well suppressing shots. Regardless, his team’s were committed to blocking shots and did so often. McLellan even reaffirmed the importance of blocking shots last week and said it was something that was expected of players (Source: 630 CHED).

Have to say that I’ve been pretty impressed by Kassian’s play thus far. He’s been fortunate in that he’s been able to slide into a roster spot with Hendricks having been suspended. Partnered with Letestu, Kassian has not been sheltered at all playing against top lines and is actually faring well when it comes to shot attempts for and against when he’s on the ice.

I’m especially fascinated by Kassian’s performance because it’s the second “moneyball” type experiment Chiarelli has conducted. The first being Anders Nilsson who was playing in the KHL before being acquired by the Oilers and replacing Scrivens. At this point, Kassian is a low-risk investment by the Oilers that has the potential to impact the roster makeup for next season. Which brings us to the next topic..

IF Kassian can continue playing well and keep things together off the ice, he could become a permanent fixture on the left side with Letestu, basically replacing Matt Hendricks. Now a couple things could go down. Hendricks could be moved down to the fourth line wing and slide to center as needed, which is something I’m in favor of. That would essentially be the end of Gazdic who really hasn’t established himself as a full time player. The other player who I think should be moved if Kassian is signed is Korpikoski who hasn’t been at all effective this season. He still has one more year on his deal that pays $2.5 million. Money that could be spent on a forward that can actually have a positive impact on his team.

Having said that, because of his age and his perceived value at the trade deadline, it would not at all surprise me if the Oilers move Hendricks instead and keep Korpse. Hendricks will be 35 this summer and has one more year remaining on his contract which will pay him $1.85 million. He’s played very well in a bottom six role this year, but isn’t likely in the Oilers long term plans.

One could also make the argument that if Kassian does well and is signed that Benoit Pouliot should be the one traded. First off, it makes no sense to get rid of a productive player like Pouliot, who is also one of the few players who forechecks really well. He does come at a hefty price tag of $4.0 million per season for the next three seasons. But that’s money well spent when you consider his scoring rates and impact on team possession. Side note: it only occurred to me today that Chiarelli once traded away Pouliot when he was in Boston to make room for a younger player in Caron (Source: Boston.com). It’s a different situation today, so I do not expect history to repeat itself. 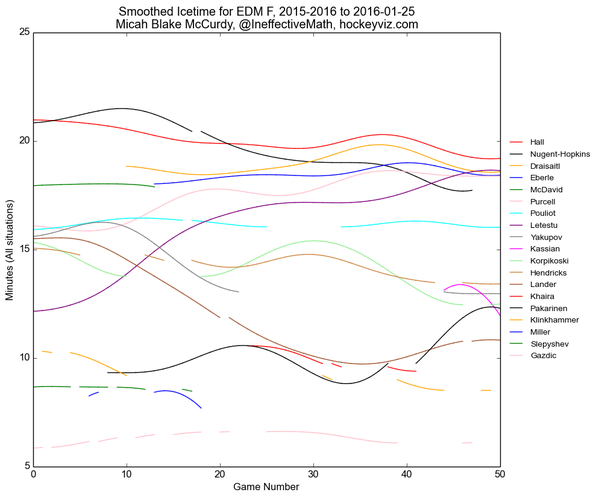 In the first graph, we see how Nurse has been getting a ton of ice time, and it really hasn’t been at all reduced despite his struggles. Can’t really blame him as there aren’t many options for McLellan. Also interesting to see Schultz getting some more ice time, which I personally think is a way to showcase him a bit more leading into the deadline. He hasn’t been getting as many offensive opportunities as last year, but his deployment has definitely changed in the last few weeks.

As for the second graph, the only thing that stands out is RNH’s reduced ice time after his flu bug (thanks to Bruce McCurdy for pointing that one out). We also see here that Letestu is getting a lot more ice time as the season has wore on. He’s definitely found some nice chemistry with Kassian and Pakarinen in the last few weeks, so hopefully that continues. Definitely something to keep any eye on as this could alter the Oilers roster going forward.

As always, let me know if you have any feedback.

Oh and for fun: